A public and reproducible collection of reference implementations and benchmark suite for distributed machine learning algorithms, frameworks and systems.

Tutorial: Adding an existing PyTorch model to an MLBench task

In this tutorial, we will go through the process of adapting existing distributed PyTorch code to work with the MLBench framework. This allows you to run your models in the MLBench environment and easily compare them with our reference implementations as baselines to see how well your code performs.

MLBench is designed to easily be used with third-party models, allowing for quick and fair comparisons and saving all of the hassle that’s needed to implement your own baselines for comparison.

We will adapt the code from the official PyTorch distributed tutorial to run in MLBench. If you’re unfamiliar with that tutorial, it might be worth giving it a quick look so you know what’ we’re working with.

To get started, create a new directory mlbench-pytorch-tutorial and copy the train_dist.py file into it.

The official tutorial spawns multiple parallel processes on a single machine, but we want to run the code on multiple machines, so first we need to replace the initialization functionality with our own.

to the top of the file.

We also need to change the init_processes method to reflect our previous changes, along with setting the WORLD_SIZE and RANK environment variables:

Next, we need to change the signature of the run method to add the run_id parameter. The run_id is a unique identifier automatically assigned by MLBench to identify an individual run and all its data and performance metrics.

At this point, the script could technically already run in MLBench. But so far it would not report back to the Dashboard and you wouldn’t be able to see stats during training. So let’s add some reporting functionality.

The PyTorch script reports loss to stdout, but we can easily report the loss to MLBench as well. First we need to import the relevant MLBench functionality by adding the following line to the imports at the top of the file:

Then we can simply create a Tracker object and use it to report the loss and add metrics (TokKAccuracy) to track. We add code to record the timing of different steps with tracker.record_batch_step(). We have to tell the tracker that we’re in the training loop ba calling tracker.train() and that the epoch is done by calling tracker.epoch_end(). The loss is recorded with tracker.record_loss().

That’s it. Now the training will report the loss of each worker back to the Dashboard and show it in a nice Graph.

Then load the validation set and add the goal for the official task (The Task 1a goal is used for illustration purposes in thsi example):

Creating a Docker Image for Kubernetes

To actually run our code, we need to wrap it in a Docker Image. We could create one from scratch, but it’s easier to use the PyTorch Base image provided by MLBench, which already includes everything you might need for executing a PyTorch model.

Create a new file called Dockerfile in the mlbench-pytorch-tutorial directory and add the following code:

The mlbench-pytorch-base:latest image already contains all neccessary libraries, but if your image requires additional python libraries, you can add them with the commands on lines 6 and 7, along with adding a requirements.txt file.

In order for Kubernetes to access the image, you have to build and upload it to a Docker registry that’s accessible to Kubernetes, for instance Docker Hub (Make sure to change the Docker image and repo name accordingly):

The image is now built and available fur running in MLBench

Running the code in MLBench

Navigate to the MLBench Dashboard and go to the Runs page.

Enter the URL of the newly uploaded Docker image (The host can be left out if you use Docker Hub). Then enter the command to execute on each worker:

The values in brackets will be substituted by MLBench with the correct values and passed to our script.

We also need to set that the command should be executed on all nodes instead of just the Rank 0 Worker. 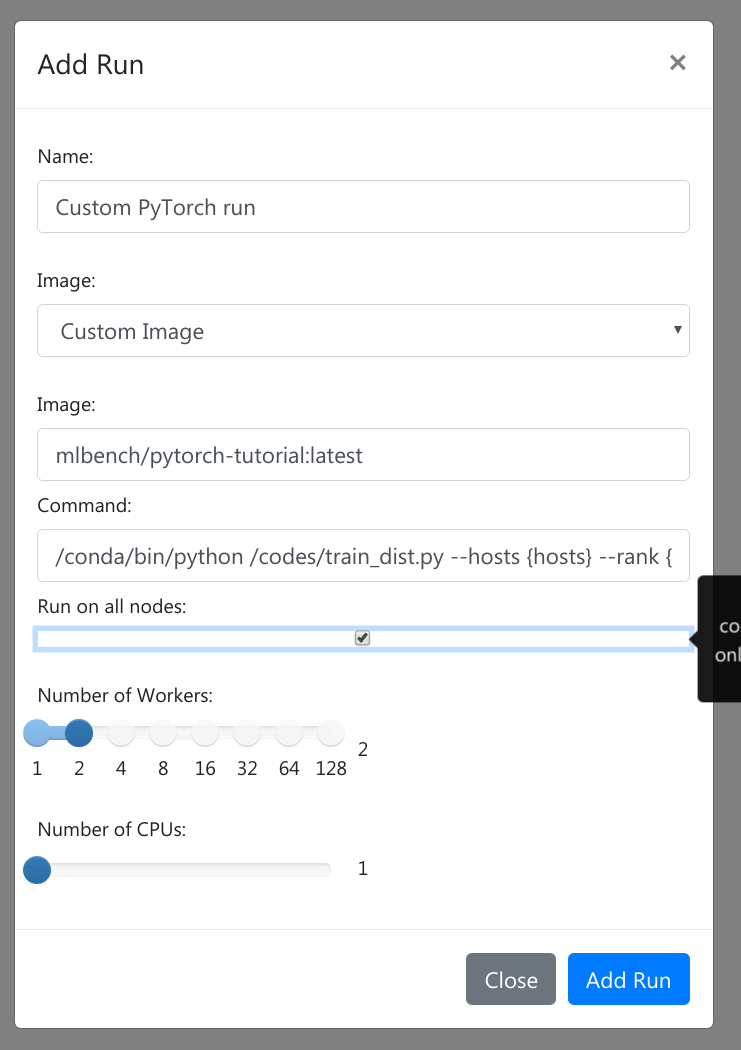 Now we’re all set to start our experiment. Hit Add Run and that’s it. You just ran a custom model on MLBench.

You should see a graph of the training loss of each worker, along with the combined stdout and stderr of all workers. 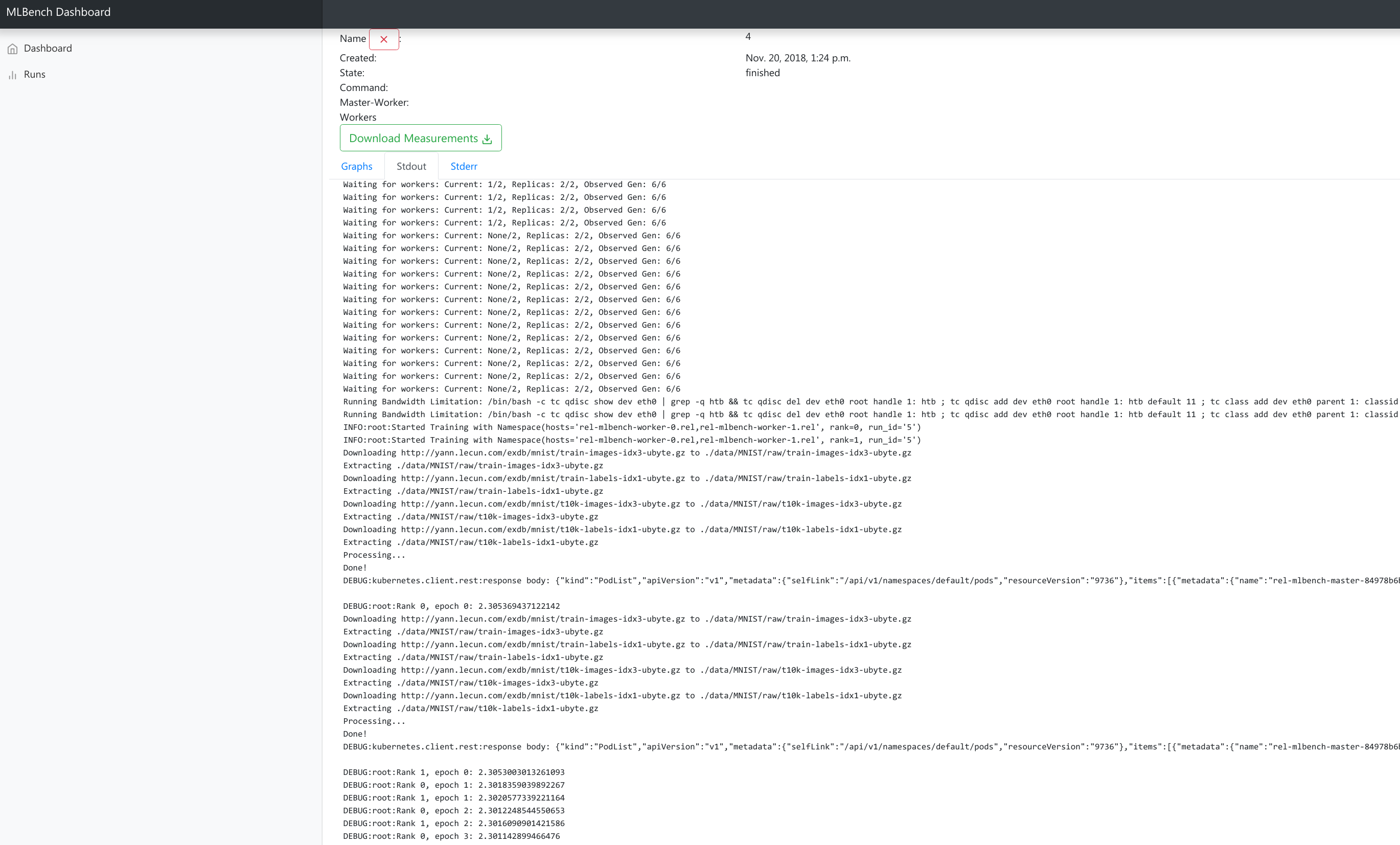